What Does This Button Do? Hurricane Edition

We have no regular What Does This Button Do? show this week. We've been running from Hurricane Irma. We are fine. See our personal blog posts: Hurricane Irma: To Go or Not To Go and Hurricane Irma - Evacuation Indecision

But, I still wanted to post something about how we used our phones this week. First of all, of course, was the hurricane tracker. We used Max Tracker and waited on pins and needles for every new update. The "forecast cone" is what we relied on when deciding where to run. We also checked the radar using The Weather Channel. If you don't know how to take screenshots from your phone, like mine below, here's the Quick Tip on Taking Screenshots 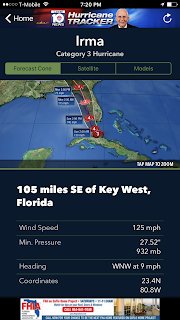 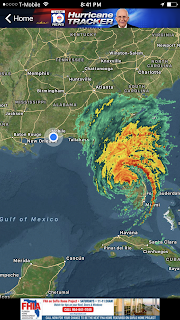 Notice how the entire state of Florida seems to have disappeared in the image above on the right? Here's the best explanation I've seen. It moved north!

Your phone won't do you any good if it's dead! Make sure you have a good battery/travel charger. We really like the HooToo because it does so much more than just charge, see How to use a USB drive with a smartphone or tablet. The HooToo is a 10,400mAh (mili-Amp-Hours) battery. That will fully charge your phone roughly 3 times.  If all you want is a battery, then we recommend the Anker 20,000 mAh. These are both about $40 - just search Amazon or your favorite tech store for HooToo or Anker. As a bonus, these could also power something like a USB Fan!

Another app we used a lot was Gas Buddy. As gas stations started running out of fuel supplies, the Gas Buddy app added a feature to indicate whether a station had gas or not. Below are short, 2 minute videos.

And then there's Google Maps! We used two special features of Maps a lot this week:

The app that I found invaluable for staying in touch with friends and family, letting them know how we were, and finding out how they were - is Facebook. With just one post on Facebook, we can let everyone know where we are and how we're doing. Since most of our real friends are on Facebook as well, we know the same about them. During natural disasters, Facebook turns on a feature called SafetyCheck which gives us all a place to check in and report our status. But more than that, I relied on Facebook for eye-witness reports. Information from Apps is great, but it's information like this from people we know that really tells us what's going on: 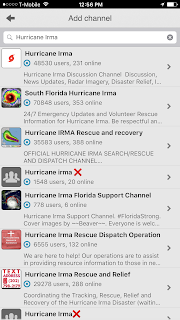 You may have heard a lot about this Walkie-Talkie app called Zello. It was instrumental in Houston for finding people who needed rescuing. We did not use it, but I downloaded it just to see how it worked. It's a free app. It uses your microphone for you to talk and people who are monitoring that channel will hear you. It's like a CB radio, or a marine radio, in that you set yourself up with a name like a CB Handle, and then you choose a channel listen to and talk on. You can see a long list of channels to choose from and you can search for "Hurricane Irma"
I can see where this could be a lifesaver in emergency situations, but don't believe it when you hear that it works without an Internet connection - it does not. It needs either cellular data or a working Wi-Fi hotspot to connect to.

If you were affected by either of the recent hurricanes, first of all, we hope you fared well - then, we'd love to hear about any ways that your smartphone helped you. Leave a comment below.
Continue your Education with Geeks on Tour by subscribing to our Newsletters!
Posted by Chris Guld at 11:02 AM

Do you have a topic you'd like to see us cover in the show? Here's the suggestion box. 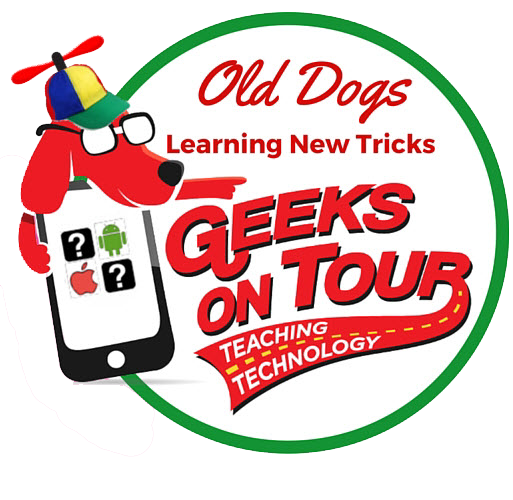